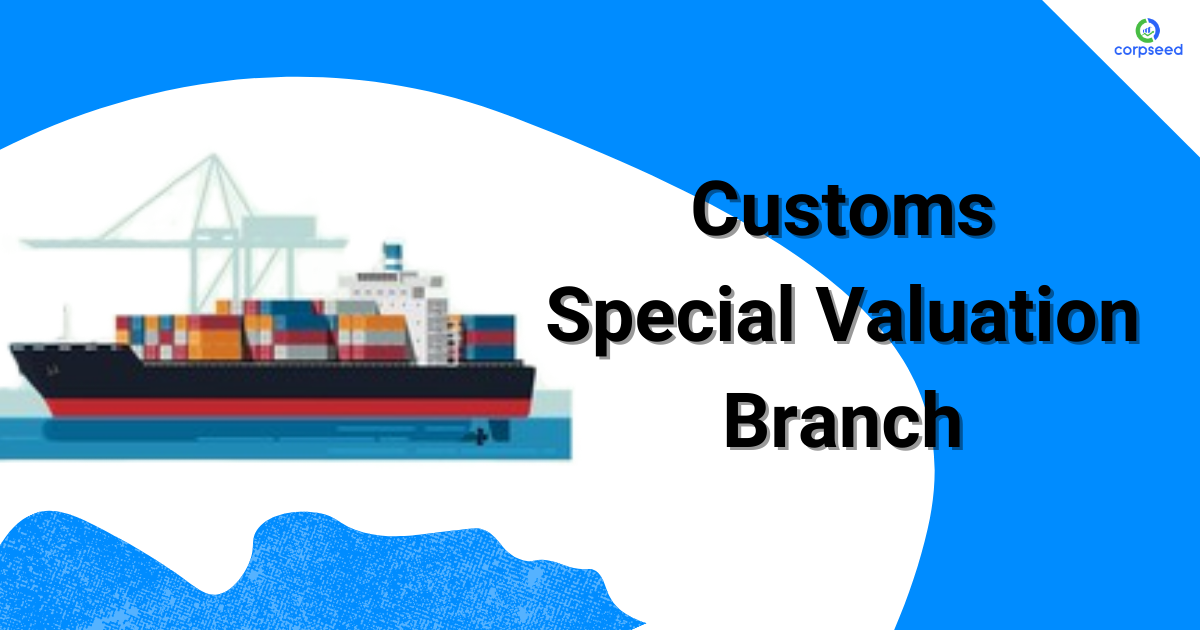 India is the second-highest populated country in the world which makes it a huge market for both Indian and foreign companies. Both developed and underdeveloped countries can’t have everything on their specific land so everyone has to import and export goods to increase the availability of goods and other utility items. It is a very huge market which is why governments have to regulate the imports and exports of goods and other utility items. Custom authority works as a regulatory body that is governed by the government of India. The Central Board of indirect taxes and customs (https://taxinformation.cbic.gov.in/) is the official regulatory organization of the government of India.  CBIC means Central Board of Indirect Taxes & Customs comes under the ministry of finance which is governed by the govt. of India. This organization and ministry is responsible for collecting indirect taxes. CBIC (central board of indirect taxes and customs) also cooperates with the ministry of finance in the process of making policies about indirect taxes and customs. 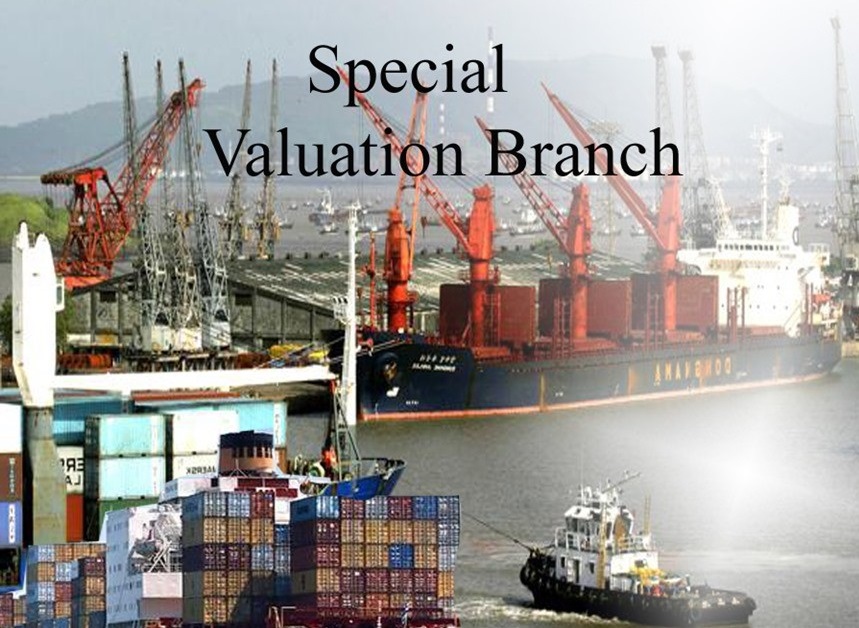 The SVB (special valuation branch) is a unit of Indian customs authorities (central board of indirect taxes and customs). The special valuation branch works in a wide range. They investigate the valuation of goods during imports between related parties. If there is a special relationship (connection) between the Indian importer and a foreign supplier, then they both can impact the transaction price of imports and that impact on transaction price can impact the customs duty over that item. For example: if a subsidiary company of India imports some goods from its foreign parent company. If They decrease the value of the imported items and they don’t pay the original import duty over that item then SVB ( special valuation branch ) will investigate this and can take action against that company.

When a subsidiary company imports goods from its parent company. Then they have to submit SVB order / IR (investigation report) to the customs authorities. Even after filing the SVB order/investigation report, they have to pay 1% - 5 % special loading (extra duty) over that import Once the valuation is finalized by the SVB (special valuation branch), the extra loading or extra duty, which was deposited by the importer has to be refunded to the importer just after the adjustment of any additions, and subsequently when the bill of entry will be finalized and settled. because the customs duty imposed will be lower leading to a potential loss in revenue accruing to the authorities. The special valuation branch continuously monitors the valuation of goods in such cases in accordance with circulars issued by the Central Board of Excise and Customs ("CBEC") from time to time. 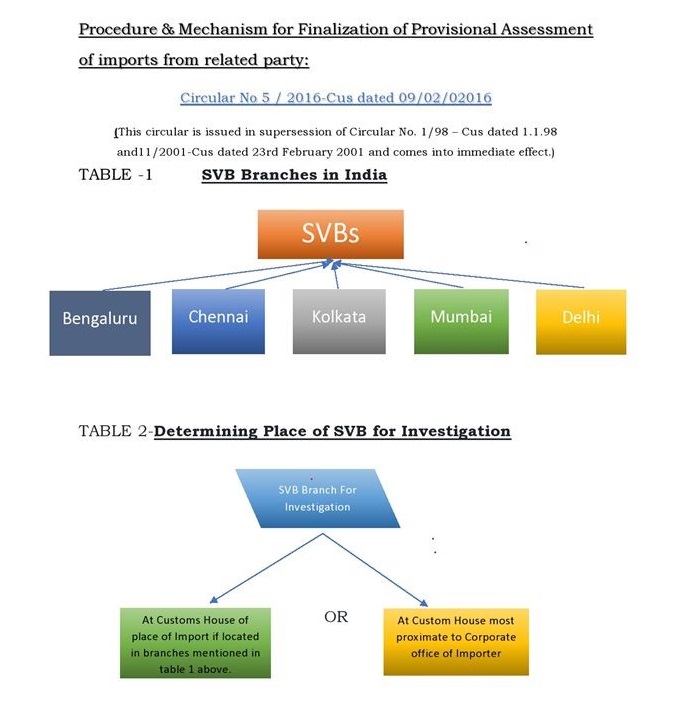 Each SVB is headed by a Deputy Commissioner of Customs and assisted by one appraising officer and the necessary ministerial staff.

What are the steps of an investigation by the SVB (special valuation branch)?

Primarily, At the time of import of the first consignment of goods in India by an importer from its related suppliers, the importer is required to file several documents along with a so-called “Annexure-A” (which contains questions relating to the relationship between the parties and manner of computation of transfer price)  Based on the information/declaration filed in Annexure-A, the appraising cell of the customs authorities (central board of indirect taxes and customs) clarify that value of imported goods which is declared by the importer is in line with the rules and regulations of custom valuation.

In case, the declared value of imported goods is acceptable to the authorities at the port, the final assessment is carried out without any reference of the matter to SVB (special valuation branch). After that, the customs authorities will allot a reference number to the importer on the basis of the value of that significant imports between related organizations (parties) is also accepted by the customs authorities.

Step 1: However, in case, the authorities at the port square measure of the read that any investigation has to be undertaken with reference to valuation of foreign product, then the case is brought up the SVB and also the foreign product square measure allowed to be cleared supported the probationary assessment. A case reference variety is assigned by the SVB authorities during this case.

In order to facilitate the probationary assessment, the businessperson is needed to execute a bond for probationary assessment with the customs authorities at the port fundamental. All subsequent imports are measured and provisionally assessed until the ultimate Investigation Report is issued by the SVB. In cases wherever the matter is brought up by the SVB, importers will expect a delay in customs clearance of products as a result of the documentary needs and a compulsory approval for referring the touch on SVB from the Commissioner of Customs (Imports).

Step 2: On the reference of the case to the SVB, the SVB department registers the matter and problems in a second form, a thus known as “Annexure B”, to the businessperson below a separate file reference variety. The response to the aforesaid form is needed to be filed by the businessperson at intervals sixty days of its issue by the SVB.

In case the businessperson fails to furnish the response to the Annexure B at intervals within the prescribed period of sixty days, a further Duty Deposit (computed at the speed of five percent of the declared assessable worth of the product is additionally collected on ensuing import of goods cleared on a probationary basis for an amount of three months.

Step 3: Post filing of Annexure B, the businessperson is needed to file careful written submissions to justify that the link between the businessperson and also the provider has not influenced the dealing worth of products at intervals within the framework of CVR (custom valuation rules). The aforesaid submissions square measured followed by personal discussions with the relevant officers, as well as further submissions if needed.

Step 4: Based on the data submitted and extra documents which can be known from time to time, the SVB authorities problems associate the Investigation Report (IR) (after getting the approval from the Principal Commissioner/Commissioner of Customs) with the customs authorities at the port fundamental with associate intimation to the businessperson or the importer. The IR includes all relevant facts, submissions created by the businessperson, investigatory findings, grounds for acceptance or rejection of dealing worth, and also the extent of influence on declared dealing worth if any at intervals within the framework of CVR (custom valuation rules).
(For reference) 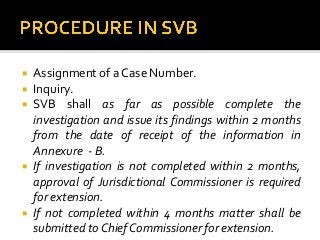 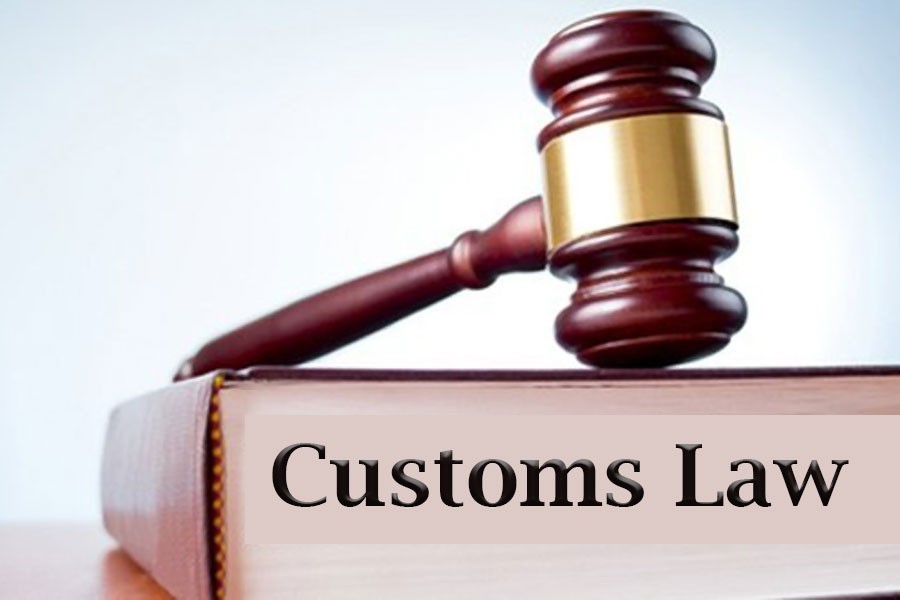