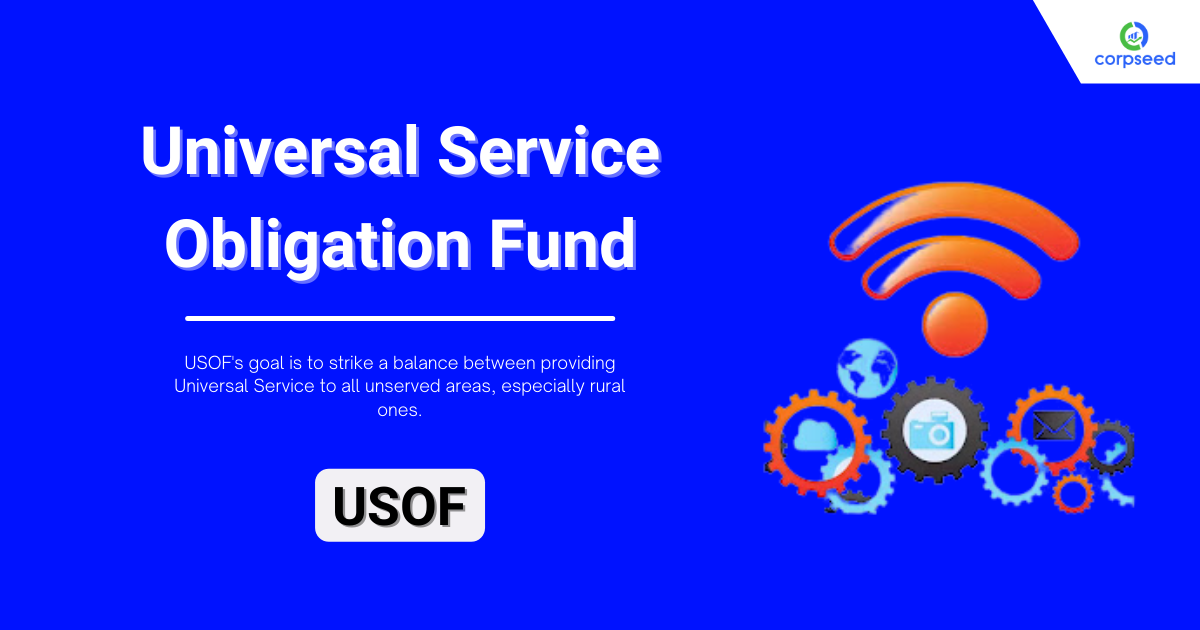 The Universal Service Obligation Fund (USOF) is a fund created by a 5% Universal Service Levy levied on all telecommunications fund operators' Adjusted Gross Revenue (AGR). This money is held in the Consolidated Fund of India and is disbursed only once the Indian Parliament has approved it.

The Indian Telegraph Act of 1885 established the USOF. In 2003, the statute was revised to give the fund legislative status. The fund and related provisions are governed by the Ministry of Communications Department of Telecommunications.

USOF's goal is to strike a balance between providing Universal Service to all unserved areas, especially rural ones.

Recent Context: The USOF is in the news because the Cellular Operators Association of India (COAI) has requested an 8 percent reduction in the license charge, which includes the USOF (5%) and the License Fee (3 percent). The idea was made in response to telecom companies' debts and the increased demand for communication services as a result of the introduction of Work from Home (WFH) in the midst of the COVID-19 pandemic.

In consultation with the Telecom Regulatory Authority of India, it was proposed to impose Universal Access Levy (UAL) on the earnings of telecom licensees through NTP 1999. (TRAI).

Vision and Goals of USOF

The Universal Service Obligation Fund's objective, as stated in its inception, is to give all rural Indians with cheap access to a dependable and ubiquitous telecommunications network, allowing them to reach their full potential.

The USOF intends to achieve the following social, economic, political, and constitutional goals:

USOF has 24 partners, according to the Department of Telecommunications. It contains the following:

With a concentration on telecom connectivity, it is thought to deliver social and economic benefits.

Several initiatives are being carried out with the help of the Universal Service Obligation Fund. The following are some of the schemes:

Despite the fact that mobile services have grown rapidly in most developing countries, they have generally remained limited to metropolitan regions. This has exacerbated the already existent urban-rural divide. Because there are various market hurdles in this attempt, including limited commercial viability, policymakers and regulators see the need for an effective regulatory and policy framework to close the gap. However, the majority of such efforts have failed miserably. This article discusses India's experience with growing rural teledensity, as well as its recent governmental attempt to increase penetration through the formation of a Universal Service Obligation Fund (USOF), which supported a number of creative initiatives.

The design and deployment of mobile services in rural areas had been the USOF's most ambitious endeavor to date. The results of several initiatives, particularly those of the USOF's mobile service providing component, are examined in this study. The USOF program, despite its unique design, had little influence on improving rural teledensity. Positive policy measures that decreased service supply costs (revenue shares, duties, ADC) and increased competition, on the other hand, enabled higher rural penetration. This highlights the question of the government's involvement in increasing rural tele densities in comparison to the private sector. The minimal impact was due to a lack of responsibility stemming from the connection between the government-owned incumbent and the USOF administrator, as well as proper appraisal of USOF, non-ring fencing of the fund, and poor project management.

Because of the lack of early involvement of private operators, the inability to properly enforce any penalties for contract violations, and the lack of a review and feedback process, the USOF has been unable to reap the benefits of an early start. In Peru, strong fines for non-compliance with contracts resulted in more on-time schedules (Cannock, 2001). Because the USOF is such a well-known organization, it is critical to achieving high-impact results. On a strategic level, the USOF should be governed by an independent authority that is held accountable for results. This architecture necessitates the use of third-party assessments and increased contract enforceability. The strategic elements of design will not produce the value that was expected without this operational framework.

This article also presents a methodology for evaluating the USOF and compares it to other countries experiences. The USOF should be viewed as one of several tools for boosting rural tele densities, with efforts undertaken to assist policy results on a range of levels.