Amid Geopolitical Tension, Sanctions on Russia, Is Gold all set for a Bull Run? 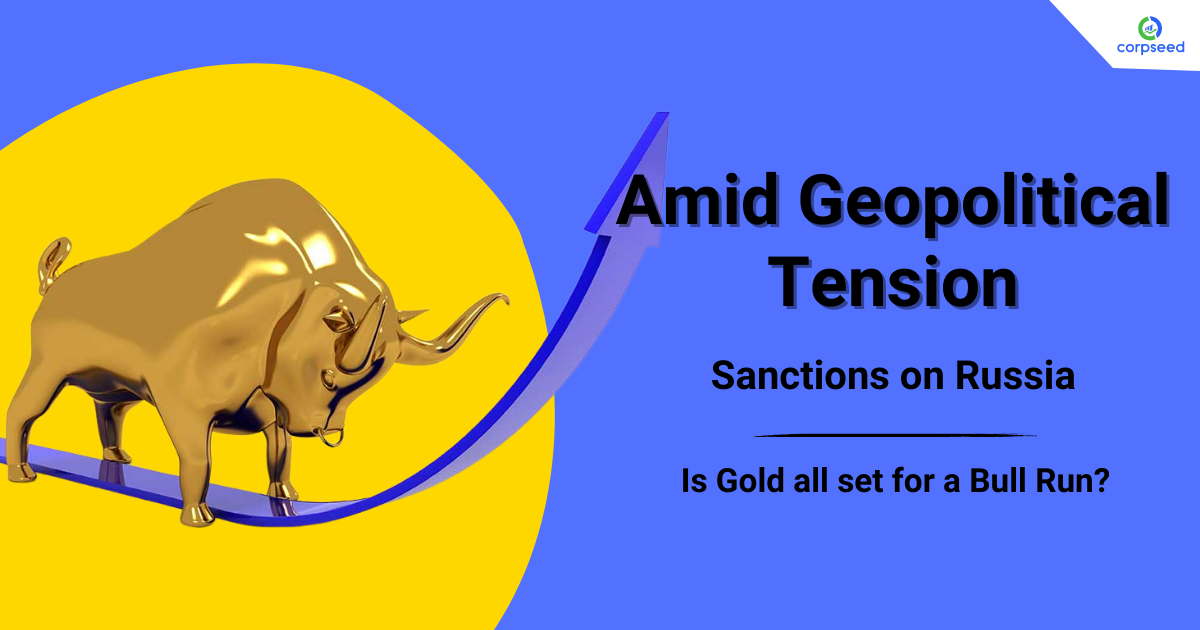 Is Gold all set for a Bull Run?

Gold is said to be a good inflation hedge. Negative real interest rates can help to boost demand. In times of global tension, the yellow metal is also considered a safe haven. When the fiat currencies in central banks' reserves are volatile, it looks to benefit from Gold.

What happens if all of these things come together in the same way they are now? Is gold on the verge of a global and Indian upswing?

According to Bloomberg, gold prices were trading at over $2,050 per ounce on Wednesday, up about 19.5 per cent from a year earlier. Gold prices have climbed more than 7.7% in the last ten days since Russia attacked Ukraine.

According to statistics from the Multi Commodity Exchange of India, gold prices rose to Rs. 53,192 for 10 grammes on Tuesday, up 12.6 per cent from a year earlier. 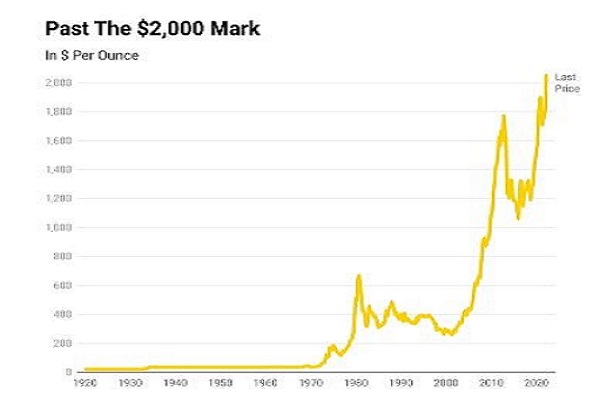 A tumultuous geopolitical climate, according to the Bank of Baroda, would push gold prices beyond $2,000 in the next 4-5 months. While prices may drop if tensions ease, gold is expected to trade around the $1,750-1,800 area, according to Dipanwita Mazumdar, a Bank of Baroda economist.

According to Chirag Mehta, senior fund manager for alternative investments at Quantum Mutual Fund, the Russia-Ukraine situation led to a strong selloff in risk assets including stocks and cryptocurrencies, as investors rushed into gold, the US dollar, and US Treasury bonds.

According to Mehta, there are a number of competing forces that might influence gold prices. "A stagflationary climate will help gold prices in the short term, but it will eventually collide with the US Federal Reserve's tightening cycle, which is projected to hold gold prices in check." In a note dated March 4, Mehta argued that a U-turn on planned rate rises due to geopolitical uncertainties would be a "huge victory" for gold.

Another reason that might stimulate gold demand is the move by Western countries to freeze a portion of the Russian central bank's currency holdings. The ruling may compel another rethinking of central bank reserve diversification.

Sanctions on Russia are an attempt to demonstrate superiority and might, and countries are realizing that they do not want to be at the mercy of others. "As a result," Mehta told Bloomberg Quint, "there is a reconsideration on foreign reserves and the need to slowly diversify them."

According to the World Gold Council's data:

The Reserve Bank of India's gold holdings has also increased. Because of a large surge in foreign currency assets in recent years, the RBI's gold holdings are close to 7% of total reserves, down from 10% a decade ago. 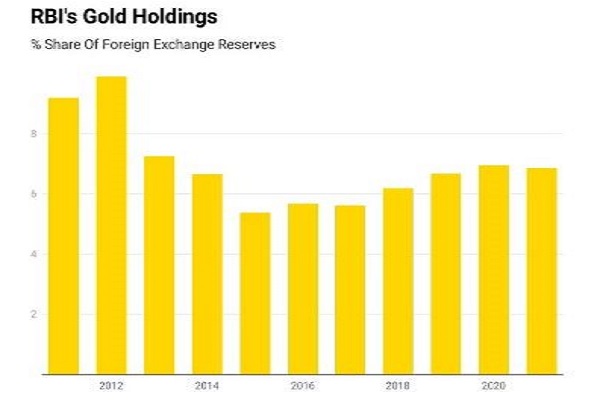 According to Somasundaram PR, managing director of the World Gold Council, central banks hold gold for safety, liquidity, and then returns it. "The dollar is more of a currency of convenience than a currency of choice. We'll have to see what the implications are for the next favoured asset class, gold after the present international crisis has passed."

Locally, a separate set of variables may come into play.

Price-sensitive Indian customers, according to Somasundaram, prefer to wait out periods of high gold prices and buy when the price drops. When gold prices fell in March of last year, for example, there was a significant increase in demand. If prices rise today, a similar situation might play out.

Income is the largest driver of gold demand in India, according to a previous report by the World Gold Council.

Other reasons, such as a negative real rate of return on deposits, aren't boosting gold demand in India, according to Somasundaram. "Social occasions, festive and wedding season, auspicious days, and the monsoons continue to drive gold demand," he said. "Because they are long-term buyers, the relationship with interest rates is restricted." 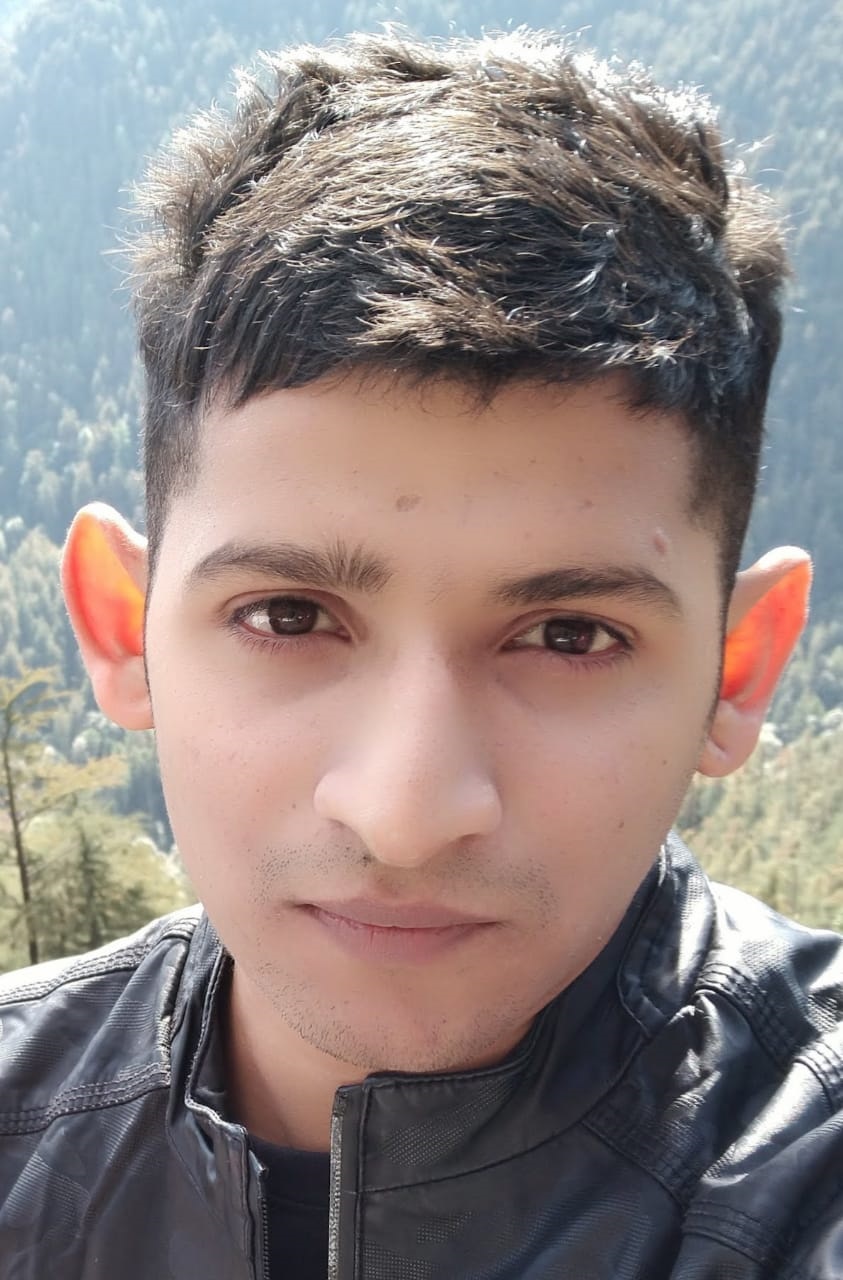