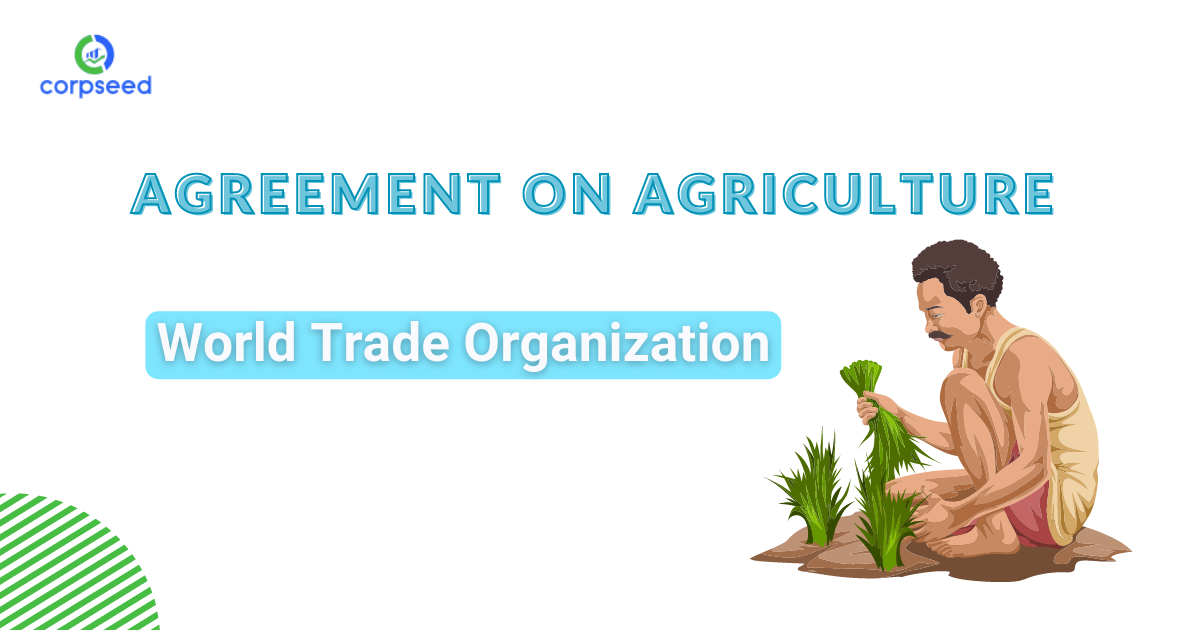 The Agriculture Agreement (AoA) is a World Trade Organization (WTO) international treaty. It was negotiated at the Uruguay Round of the General Agreement on Tariffs and Trade, and it went into effect on January 1, 1995, when the WTO was established.

The idea of replacing agricultural price supports with decoupled direct payments to farmers dates back to the late 1950s when the GATT Contracting Parties appointed a Panel of Experts chaired by Gottfried Haberler to investigate the impact of agricultural protectionism, fluctuating commodity prices, and the failure of export earnings to keep up with import demand in developing countries.

The Haberler Report, published in 1958, emphasized the necessity of reducing the impact of agricultural subsidies on competitiveness and proposed replacing price assistance with non-production-linked direct supplementary payments, foreshadowing future debates on green box subsidies. However, it is only recently that this transition has become the focal point of global agricultural reform.

Government payments to agricultural producers in industrialized countries had resulted in enormous crop surpluses in the 1980s, which were dumped on the international market via export subsidies, lowering food costs. The cost of protective measures increased as a result of lower import duty receipts and increasing domestic spending. Meanwhile, the global economy had entered a slump, prompting calls for a fresh round of multilateral trade talks based on the belief that opening up markets would improve economic conditions. The round would open up markets for services and high-tech goods, resulting in much-needed cost savings. Agriculture, textiles, and apparel were included to the grand bargain to engage developing countries, many of which were "demandeurs" of new international disciplines.

Farm lobbies in wealthy countries fought hard against agricultural compromises in the run-up to the 1986 GATT Ministerial Conference in Punta del Este, Uruguay. In this framework, the United States proposed exempting production and "trade-neutral" subsidies from WTO commitments in 1987, which was quickly echoed by the EU. [2] It also neutralized opposition by ensuring farmers' ongoing support. Developed countries would be permitted to keep subsidies that produce "not more than minimum trade distortion" in order to meet certain public policy objectives in exchange for putting agriculture within the WTO's rules and committing to future reductions of trade-distorting subsidies.

There Are Three Pillars:

Domestic support, market access, and export subsidies are the three pillars of the Agriculture Agreement.

"Domestic assistance" is the first pillar of the Agriculture Agreement. Domestic support is divided into two categories by the AoA: trade-distorting and non-trade-distorting (or minimally trade-distorting). The Uruguay Round WTO Agreement on Agriculture (1986–1994) includes a classification of subsidies by "boxes" based on the consequences of production and trade: amber (most directly linked to production levels), blue (production-limiting programmes that still distort trade), and green (non-production-limiting programmes that still distort trade) (minimal distortion). While payments in the amber box were required to be lowered, those in the green box were not required to do so. The AoA's Annex 2 contains the specific requirements for green box payments. All must, however, meet the "basic criteria" in paragraph 1 of causing only minor trade or production distortions, and must be provided through a government-funded programme that does not entail consumer transfers or producer price support.

The domestic support system of the Agriculture Agreement currently allows Europe and the United States to spend $380 billion on agricultural subsidies each year. The World Bank disregarded the EU and US arguments that small farmers required protection, pointing out that more than half of the EU's Common Agricultural Policy subsidies went to 1% of producers, while 70% of subsidies in the US go to 10% of producers, mostly agribusinesses. These subsidies result in a torrent of low-cost commodities flooding global markets, reducing prices and undercutting poor-country manufacturers, a practice known as dumping.

Least developed countries (LDCs) were spared from tariff reductions, but they had to either convert non-tariff obstacles to tariffs (a process known as tariffication) or "bind" existing tariffs, putting a limit on future increases.

Green box subsidies disrupted commerce, impacting developing country farmers and harming the environment, according to a 2009 book by the International Centre for Trade and Sustainable Development (ICTSD). While some green box payments have a little impact on output and commerce, others have a large one. According to the most recent official submissions to the WTO, the United States provided $76 billion in green box payments in 2007, accounting for more than 90% of total spending, while the European Union notified €48 billion ($91 billion) in 2005, accounting for roughly half of all support. Green box funding in the EU has been divorced from income support, which might have a major influence on production and trade.

According to Third World Network, "By switching from one type of subsidy to another, the rich countries have been able to preserve or increase their extremely large subsidies... This is why, despite the apparent promise that Northern subsidies would be reduced, the total amount of subsidies in OECD nations increased rather than decreased following the Uruguay Round." Furthermore, Martin Khor stated that the green and blue box subsidies can be just as trade-distorting as the red and blue box subsidies since "the protection is better camouflaged, but the result is the same."

On July 18, 2017, India and China jointly submitted a proposal to the World Trade Organization (WTO) calling for the elimination – by developed countries – of the most trade-distorting form of farm subsidies, known in WTO jargon as Aggregate Measurement of Support (AMS) or 'Amber Box' support, as a condition for considering other reforms in domestic support negotiations.

Developing countries sought to defend their interests and populations during the Doha negotiations, fearful of competing on the global market with powerful developed and exporting economies. Many countries have large rural populations with limited access to infrastructure, farming resources, and employment opportunities. When a result, these countries are concerned that greater trade liberalization may harm native rural populations employed in import-competing sectors, making them more exposed to market instability and import surges as tariff barriers are lifted. To protect those countries, several measures have been proposed, including the Special Safeguard Mechanism (SSM) and the handling of Special Products (SPs).

In the case of an extraordinary rise in imports or the introduction of unusually inexpensive imports, a Special Safeguard Mechanism (SSM) would allow developing countries to implement additional safety requirements. This issue has sparked debate, with some negotiating parties saying that SSM might be used excessively and often, distorting trade. In response, the G33 group of developing nations, a prominent proponent of the SSM, has maintained that if the SSM is to be effective, bound tariff breaches should not be ruled out. SSM's effects on global commerce for both rich and developing countries were modelled in a 2010 study by the International Centre for Trade and Sustainable Development.

WTO members decided to allow poor countries to assign or create an acceptable list of products under tariff lines as Special Products (SPs) based on "food security, livelihood security, and rural development" at the 2005 WTO Ministerial Conference in Hong Kong.